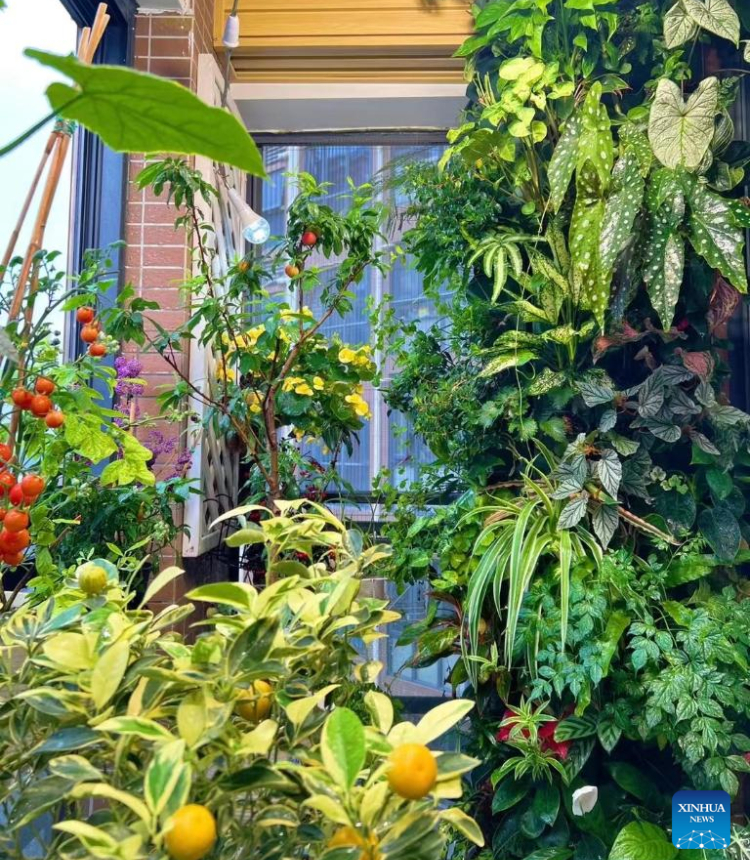 On the 5-square-meter balcony of Zhong Liu's apartment, there is a mini-farm crammed with lemons, tomatoes, eggplants, blueberries and mint.Zhong's idyllic urban lifestyle started in 2020 when residents were required to work from home due to the COVID-19 epidemic."I grew garlic for the very first time as I didn't want to throw it away. It sprouted and grew roots in just seven or eight days. It opened up a brand new world to me," said the young illustrator who lives in the city of Shenzhen, an economic powerhouse in south China's Guangdong Province.Zhong is not alone. An increasing number of urban youth have picked up the hobby of growing vegetables on their balconies as working from home has changed many people's lives in the urban areas across the country.In the first quarter of this year, sales of vegetable seeds on Taobao's Tmall rose dramatically year on year, and the number of seed buyers increased by more than 100 percent for three consecutive years, according to a report released by Taobao, China's e-commerce platform giant.Beijing, Shanghai and Hangzhou became the cities with the largest number of seed buyers in China, it added.Zhong has started sharing her journey on social media platforms this year, which has brought her more than 100,000 followers. In a chat group consisting of over 100 young balcony green thumbs across the country, they share the growth of their vegetables every day, discussing which plants are more suitable for balcony planting and how to fertilize and pollinate crops."Balcony gardening can heal young people's busy urban lives. We sow and look forward to the harvest, and experience the happiness of the idyllic moments," Zhong said.Chinese city managers and social organizations are also seeking new methods to rebuild the relationship between urban residents and nature through vegetable gardens.The municipal government of Guangzhou, capital of Guangdong, launched a city vegetable garden project last March, providing seeds and farm tools as well as organizing agricultural experts to provide online Q&A for local residents, in an effort to encourage urban children to get in touch with nature through balcony planting."In cities, people need to get along with nature. They will be healed spiritually during the process of getting close to soil, seeds and plants. Parent-child relationships can also be strengthened by taking part in the activities together. Community gardening also promotes people-to-people communication, and makes neighborhoods harmonious," said Li Xiangyang, a researcher with the Guangzhou Academy of Agricultural Sciences.